In Mark Goodacre's blog entry for November 26, 2006, he reported concerning a Synoptic Gospels session that he had organized for the SBL conference in Washington, D.C. Mark reported,

In spite of the interesting discussions, the thing that will remain with me for the longest will be, I think, Jimmy Dunn's strongly worded critique of his former student's book, which he accused of "wooden literalism", of "tritheism, ditheism or modalism"; and he said that Simon was in need of a "refresher course in hermeneutics". I am afraid that I could not resist adding after he had finished, "I am tempted to say: don't hold back; tell us what you really think." Simon defended his book bravely, and had not had either Deirdre's or Rikk's responses in advance, so he did particularly well on those.

Now, thanks to SBL's Review of Biblical Literature on-line, James D. G. Dunn reviews Simon Gathercole's recent book on Jesus, The Pre-existent Son: Recovering the Christologies of Matthew, Mark, and Luke. Here is a brief excerpt that refers to the SBL session. 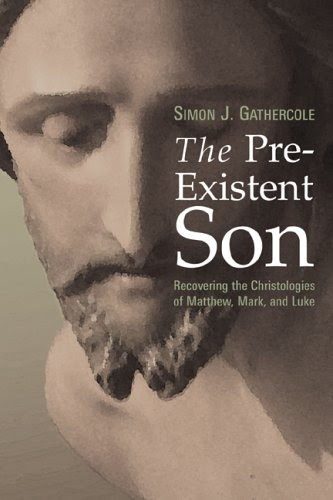 our regular exchanges for many years now, which continued at the SBL Annual Meeting in Washington (November 2006), when I was on the panel reviewing his Pre-existence book. It is because I admire Dr. Gathercole’s scholarship and his ability to mount a weighty exegetical argument (from which I continue to learn), and because I believe it to be by such robust dialogue that discussion can progress most fruitfully (so I fully expect him to respond in the same manner), that I have offered this review.

Posted by abcaneday at 9:50 AM

Find a book on Amazon.com

The Faith of Jesus Christ

Readers of this blog

The Race Set Before Us: A Biblical Theology of Perseverance & Assurance

The Race Set Before Us (IVP web site)
Order book from Amazon.com:

I have been a guest at Maranatha twice, 2002 and 2007, when I spoke at Bible conferences for pastors and church leaders. My wife, Lois, joined me in 2007. We regularly support Maranatha as much as possible.

Which Church Father are You?