I posted the following interview on my Facebook page last week, but since I was out of town I did not take time to post it here. Frankly, I was amazed at the forthrightness of Martin Bashir. I encourage you to take a few moments to hear Bashir's questions and Bell's responses. Then, I encourage you to take the time to listen to Paul Edwards' interview of Martin Bashir here.
Martin Bashir’s Superb Interview of Rob Bell
Perhaps you have wondered, as I, whether Martin Bashir is an evangelical Christian. It was not only Bashir's knowledge of the issues that struck me but also his evident passion to get to the truth of the matter. Yesterday, while in New York City we attended Redeemer Presbyterian Church (at 2 West 64th Street, NYC) we noticed an announcement of an upcoming event next Monday concerning a conversation between Tim Keller and Martin Bashir (see here). This prompted a thought. I wondered whether Martin Bashir attends Redeemer Presbyterian Church. So, after returning home, today I did a little research that confirmed my hunch. Bashir does, in fact, attend Redeemer and he is an evangelical believer. However, listen to the full interview below to hear Bashir’s explanation of why he interviewed Bell as he did. He is interested in the truth. 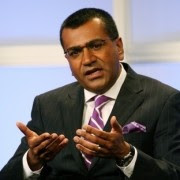 Here’s the audio of my interview with MSNBC’s Martin Bashir on his interview with Emergent Universalist Rob Bell of Mars Hill Church in Grand Rapids. Martin discloses whether or not he is a committed Christian and if the blog rumors are true that he attends Tim Keller’s Redeemer Presbyterian Church in New York City.

Listen to the interview here.

You may listen to or download the interview here.

Posted by abcaneday at 1:21 PM

Is Bashir interested in the truth? Or is he interested in control and certainty, which in truth are inaccessible to fallible, sinful human beings this side of eternity?

Did you listen to the interview Paul Edwards engages with Martin Bashir? He claims he is interested in the truth.

Let's ponder your second question, which actually makes an assertion, a truth-claim.

You wonder, "Or is he interested in control and certainty, which in truth are inaccessible to fallible, sinful human beings this side of eternity?"

First, Bashir did not claim to be on a quest for certainty; his pursuit is truth. But, I will assume that you are using truth and certainty interchangeably, given your the nature of your two questions.

Second, do you not recognize that you have asserted that you know the truth with certainty which is the very thing that you deny that Martin Bashir can know? If it is not obvious to you, I will attempt to make it clearer for you. You claim that truth is in truth . . . inaccessible to fallible, sinful human beings this side of eternity. Yet by making this statement within your question, you are asserting a truth-claim and doing so with certainty. After all, the phrase, in truth, as you use it, is another way of speaking of certainty. If certainty is in truth . . . inaccessible to you, as you claim, then I am wondering how you can know with certainty that truth is not accessible to you or to anyone else.

Thanks for stopping by.

Thanks for posting these interviews. I look forward to viewing them.

Just viewed the your video posts and it seems like the interviewer hasn't read the book but rather the critics reviews of the book.
Am I missing something?

Yes, HuEmanity, I believe that you are missing something. It is manifestly evident that Bashir did read the book.

A. B., I applaud your responses, above, for their clarity and simplicity.

When I preached in South London in the 1990s Martin Bashir was in the congregation and was an enthusiastic lover of the Gospel.

Find a book on Amazon.com

The Faith of Jesus Christ

Readers of this blog

The Race Set Before Us: A Biblical Theology of Perseverance & Assurance

The Race Set Before Us (IVP web site)
Order book from Amazon.com:

I have been a guest at Maranatha twice, 2002 and 2007, when I spoke at Bible conferences for pastors and church leaders. My wife, Lois, joined me in 2007. We regularly support Maranatha as much as possible.

Which Church Father are You?